The "High Country" - Running a bit of Western States

I am blessed. I have been reminded of this repeatedly over the last month or so, which (not surprisingly) correlates with a lot of beautiful weather and great running.
I was lucky enough to be invited to run with a group of INCREDIBLE individuals on a STUNNING course. I made a new friend, Jack, during the Silver State 50km race in May, and he graciously included me in a run this past weekend. He (kindly) said that it feels like we're old friends - I reminded him that it's because I run so slowly and he's stuck with me for hours ;)

While most everyone else was training for much longer distances, I was just along for the ride (read: trying to keep up). We started at Squaw and climbed up to Watson's monument, and then we ran along a ridge, down a canyon and back out. Describing it to Stephen afterwards, I sounded like Buddy the Elf, "I passed through the seven levels of the Candy Cane forest, through the sea of swirly twirly gum drops, and then I walked through the Lincoln Tunnel."


It was insanely beautiful and also a great learning experience. Being relatively new to trail running (did my first real trail race less than 6 months ago) I'll be the first to tell you I have no idea what I'm doing. I had never run on trails as rocky as these. I had never run on creek-y trails. And I'm pretty sure I had never "bonked" or been calorie deficient. So needless to say, it was NOT a boring day.


So I made a list of things that I need to do for future runs: 1) Eat. Eat the night before. Eat the morning before. Eat during. Eat when you're not hungry. Eat when you are hungry. Eat. 2) Buy a hydration pack. Stephen's was wonderful, and now that I've experienced what it must be like to be a camel, I want one of my own. 3) Try new things - like salt tablets!

It was the longest I've ever run - over 8 hours! And I actually enjoyed it a lot. I saw a bear track, and I got to see a beautiful portion of the Sierras that I had never experienced (despite growing up in Reno!) I met some wonderful people that I hope to see many more times. I drank from a river, stuffed my face with Oreos, and laughed A LOT at everyone's great stories.

I'll be hitting the local trails for a while, but I'll be dreaming of the high country :)
at 11:54 PM No comments: 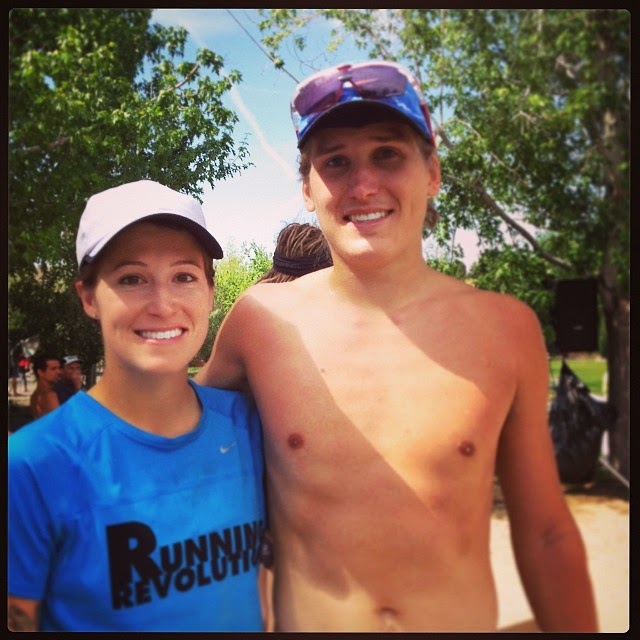 To say that I underestimated this course would be a gross understatement. On paper it looks challenging, but manageable, climbing a total of 9,100 feet over 50 miles. Not bad, I thought; after all, Miwok 100k, which I finished in 10:06, has 12,500 feet of gain. This will be a breeze...not! It was, however, fantastically well managed and had a bounty of course markings.

I drove to Reno late Friday morning to stay with Mags and her mom, who lives 15 minutes from the start. After a relaxing lunch of veggie burgers and fruit, we left for packet pickup, where we met up with the Quicksilver gang. By this point, the nerves were getting to me. That was only compounded after Mike Holmes described to me, in detail, the 50 mile course. Wow, I thought. This is going to be a long ass day on the trails.

After a few bowls of warm dijon lentils, Mags and I went to bed, tossing and turning until our alarm chimed at 4am. We washed down some peanut butter toast and bananas with coffee and made our way to the start at Rancho San Rafael. The air was warm, surprisingly so for 5am, which could only mean that the afternoon would be uncomfortably hot. As with every race, we began milling about the start line 10 minutes before the starting time of 6am. I sized up the competition, knowing full well that I couldn't take the win, but trying to at least see where I'd fit in. Bob Shebest, Jean Pommier, Marc Laveson, Nikki Kimball, Chikara Omine, Gerard Dean, and Erik Skaden, to name a few, toed the line. Holy crap, there's some impressive talent here! The amazing RD, John Trent, counted us down, and we took off.

The pace was easyish for the first minute, but quickly picked up as we hit the singletrack. Chikara and Marc were pushing hard, and I knew better than to try to keep their pace this early on. A small group formed of about 5 runners (including Chikara, Marc, Bob and a couple others I couldn't identify), as I settled into my own pace, watching them disappear over the rolling hills. Jean quickly caught up with me, and I pushed comfortably hard up a semi-technical climb and to the first aid station at Radio Towers. He offered some words of encouragement as he passed me. I upped my pace, but it was pointless to try and stay with him; this would be the last I saw of Jean.

It wasn't long before I climbed my way to the second a/s at The Pond, but it would still be another 4 miles or so until I reached the Peavine summit. Finally, after two hours of mostly climbing (3,200 feet in about 12.5 miles) I rolled through the summit a/s and onto the 5 mile descent to Long Valley. This is where my race got exciting. I don't know how many times John Trent told us at the pre-race meeting, but it had to have been at least 4 or 5. THE 50K RUNNERS WILL TAKE A LEFT AT THE BOTTOM OF THE DESCENT AND THE 50 MILE RUNNERS WILL TAKE A RIGHT. The course was insanely well marked, complete with massive arrows that guided runners onto their respective courses at the fork in the trail. Somehow I had talked myself into following the blue ribbons, thinking that I was supposed to follow my favorite color (Wrong! I was supposed to follow the yellow brick road!). After close to 1.5 miles on the wrong trail, and seeing no runners in front of me for 10 minutes, the realization hit me. My heart sank. All I could do now was cuss away my frustration and try to make up lost time. I doubled back to the correct course, but had lost 6 or 7 places in the process. Oh well. My mistake.

I hustled enough to catch a few runners at Long Valley (mile 20ish), one of whom was Erik Skaden. "Hey! Is Anton Krupicka your idol?" he shouted. "You just need to run shirtless! He never runs with a shirt." The humor was a brief respite and definitely appreciated at this point. After a more formal introduction, we leapfrogged for the next 5 miles until Dog Valley. This was my favorite stretch of the race and one of the most beautiful trails I've run on. Towering pine trees flanked the course on both sides, broken only by the occasional meadow. It was a stark contrast to the dusty rock-strewn trail I had been on a few miles earlier.

It wasn't until the stupidly steep climb out of the a/s that we settled into a rhythm with one another. Well, to be more precise, he pulled my ass up the rocky, rutted climb and pushed me through the next a/s at Ranch Creek. Along the way, he offered nuggets of running wisdom that he had picked up from his top-10 finishes at States and a myriad of other phenomenal wins and personal bests. I opened up my legs on the 3 mile singletrack descent into Boomtown, where we could fill the tanks at the River Bend a/s (mile 31). The volunteers down here were AWESOME. To be fair, the volunteers at every a/s were great, but they offered extra encouragement at River Bend.

After my buddy, Austin, doused my head with ice water, I began the slow ascent to the Peavine summit. My legs were dead, and I couldn't manage anything faster than a trot without cramping. The altitude combined with the wind and heat had dehydrated me more than expected. I remained focused, putting one foot in front of the other. Finally, I hit the aptly named Sandy Hill a/s, which meant I had about 3 more miles until the summit. This section was truly soul-crushing. There were instances in which I actually went backwards because the grade was so steep. I gained a lot of respect for the course and the other runners here.

It must have taken me 50-60 minutes to finish the 3 mile climb to the summit, but once I did the feeling of relief was immeasurable. I took my time at the Peavine a/s before starting the 11 mile descent to the finish. Contrary to what the course profile shows, the final descent has a few kickers that knock the steam out of your legs. By this time I was cramping bad enough that I walked the uphills and couldn't really manage to stride out on the downhills. I took my time and enjoyed the final views before returning to the base of the mountain. Thankfully, Maggie and her mom were waiting for me, making for an emotional finish. I was 2 hours slower than my goal, finishing in 9:23, 14th overall and 2nd in age, but as always I'm grateful for the experience.

Maggie crushed the 50k course, finishing in 7:12 and 2nd in her age group, but still managed to greet me with such enthusiasm! It's been so much fun training with her and sharing these experiences. I can't wait to do it all again!