A sneak peek at my first linocut print! 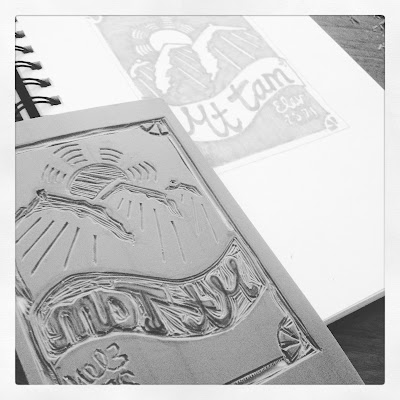 A reflection on my first attempt at 100 miles

STRAVA DATA
My Suunto only caught the first 53 miles.


COURSE MAP
In my excitement leading up to race day, I decided to make a map of the new course. The race director adopted it as the official course map - woo hoo! 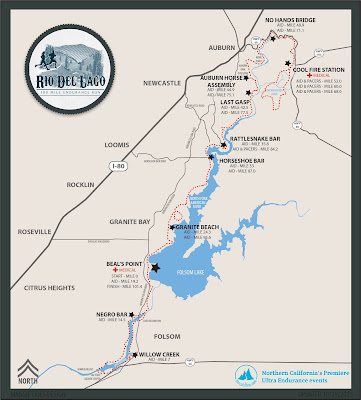 BEFORE THE RACE
I hadn't been so nervous before a race since my first half marathon - almost 10 years ago! I was happy with my training. I'd loved the higher mileage weeks - I never thought I'd break 40, let alone 80 miles in a week. I'd made a pacing plan. I'd run two 50k races, about 6 and 3 weeks out from Rio. I'd cooked potatoes and peas and packed them into baggies to eat on the run. The night before, I obsessively checked everything. I think next time I'd have a whole beer instead of just a few sips of wine - haha! But I hit the hay early the night before the race, and I couldn't wait to run.

The first 20 miles flew by. I toed the line alone and was relieved when I met up with Mel (my cyber-training buddy) just a couple miles in. The stars were stunning - Orion was above us as the sun rose on our left. I had never run on the American River trail before, but it was fantastic. The weather was perfect - nice and cool. My hips were a little tight and I started to get a hotspot on my right toes, but I'd run through worse and figured I'd ignore it for now (haha).

Mel and I had planned to take it easy. Even at our "slow" pace, Beal's Point arrived before I knew it. I was right on pace - just a couple minutes ahead of my goal time. I was stoked to see Jenni and Jesse J. - all decked out in costume! I was so jazzed. I grabbed some ziplocks of potatoes, applied sunscreen (well, Stephen sprayed it on me), shed a couple layers of clothes, and headed out towards the "Meatgrinder."

BEAL'S TO RATTLESNAKE (38.5 miles)
Terrain: Rolling, mostly runnable, with short kickers. A few sections were annoying - requiring big slow steps up or down.

Climbing out of Beal's, I bumped into Leigh-Ann and her friend, Janeth - who ended up being a wealth of 100-miler info! Mel and I hung together through the Meatgrinder, which was really beautiful, despite the depressingly empty lakebed. My motto was EAT, EAT, EAT. And I did! I felt awesome. My hips had warmed up - my "hot" toes had reached a consistent pressure. I could tell I had blisters but as long as they stayed at that pressure, I could deal with it. It was my dang socks - I'd worn old favorites with worn-out cushioning. I should've put on the brand new ones I had sitting in my bag!

Nonetheless, the weather was perfect, and the company on the trail was unbeatable. I felt AMAZING. The miles were melting away, my stomach felt great. I was super hydrated and happy that I'd stuck with my Salomon pack - I was chugging almost a full pack every 20 miles. Coming into Rattlesnake I was greeted by Dawn H. - an ER doc and ultra bad-ass - and Jenni was already cheering enthusiastically here, too! I haven't run a race with so many friendly, cheering faces. It was kind of overwhelming - so I got down to business filling my Salmon pack, grabbing some potatoes and Gu, and heading back out.

RATTLESNAKE TO COOL (52 miles)
Terrain: Loved this - really runnable rollers along the hillside, with the American River down to the right (south). A couple of long climbs - not brutally steep (no Cardiac trail) - on the way up to the Auburn Overlook. Nice downhill to No Hands Bridge, followed by a 3-mile climb up to Cool, which I mostly pout-walked.

After Rattlesnack, I was ready to do work. I figured it would be the hottest, hardest section of trail. I wanted to put my head down and do work. I'd split from Mel a little earlier, so now running alone, I decided to listen to some Doo-Wop (my favorite running music). The trails were all new to me - and I loved them! The rolling terrain kept me engaged and paying attention. The sun was mottled through the trees, and the air was cool. Again, I was surprised at how great I felt, but I stayed on pace and KEPT EATING. I was eating a bag of potatoes every hour and a Gu every 45 minutes.

I saw Mel again at the Overlook. Heading into that aid station was a big hike- and I shared it with super badass, Erica T. She'd run Rio a couple years ago and crushed it. She was on track to do it again! After trudging up the hill and making it to aid, I started to make little mistakes. I was so focused on hitting the porta-potty, I didn't eat enough. I had eaten all of my homemade potatoes, but I didn't grab enough food to get me to Cool feeling good. I was also wearing a sweaty t-shirt and sports bra, and the air was getting noticeably cooler. I was getting cold. I noticed Erica had her headlamp - and most people had an extra shirt. I had neither. My noob was showing.

Feeling kinda annoyed at myself, I headed down from the Overlook on familiar trails and still feeling great. My legs felt fresh. My tummy wanted real food, but I was downing Gus easily. Then a switch flicked - I got bummed, I got cold, and I got hungry. I walked intermittently down to No Hands, feeling angry that I hadn't held onto my longsleeve. Feeling annoyed that I didn't grab an extra bag of potatoes. It was awesome seeing my crew at No Hands. But I was so grumpy that I marched through the aid station without eating. Taking a few minutes to calm down and eat something would've helped a lot - oops!

COOL LOOPS (68 miles)
Terrain: Rolling singletrack. A climb up the road on the first (counterclockwise) loop. Run down the road into Cool to finish second loop.

So I made it to Cool (53ish miles), mostly "pout-walking." It was awesome watching the speedy folks (like Erika L. and Luke G. whiz past me - and it cheered me up!) Cool was fantastic. I was so happy to be there, I was happy to see my full crew (Stephen, Jack, and Ken), and I was REALLY happy to change my shirt and put on a couple more layers. The sun had set - beautifully - over the Cool meadows as I was running in, so it was getting really chilly. I was so freaking pumped to be in Cool and to have Stephen with me, I just wanted to get running and change my mood. After a slight detour (we started the first loop in the wrong direction) - Stephen and I climbed the short hill on road and were running on the rollers in the dark.

It. was. AWESOME. Everyone was chatting and jumping on and off the trail for one another - It was like running camp for adults. I was a little cold, but really happy. The stars were brilliant. Stephen was chatting away - and I was really, really happy. It was perfect.

My mood had improved, but I noticed my hips were getting tight, and I was feeling a little tired. I planned on eating a lot of hot soup after the first loop - but there were no vegetarian options. I had a lot of learning moments - so next time I will have my crew bring my own soup and camp stove - or I will check dietary issues with the race director ahead of time.

The second Cool loop felt longer - but I was determined to knock it out, and we were having fun. I ate too many Chomps and puked about halfway through. After puking I felt FANTASTIC, and Stephen and I ended up crushing it and finishing the second go-around faster than our first.

UN-COOL (76 miles)
Terrain: Back downhill 3 miles to No Hands. Four mile climb from No Hands up to the Overlook.

After the Cool loops, I was really freezing. Laura and Kynan were angels at the aid station. And thankfully Jack - my running guru/mentor/inspiration - knew what was he was doing and brought extra long sleeve shirts. Wrapped in a blanket, I sipped on hot water, took some Advil for my legs, which were feeling pretty stiff, and mentally gave myself 10 minutes to sit (the first time I'd sat). It revamped my mood, and I was pumped to get moving again. Although, if I had it to do over, I would've switched to pants and maybe switched my socks, which were pretty grimy. I think I should have kept my legs warmer.

I took no-doze before leaving Cool, and my ass was on fire heading down to No Hands. I was pumped. Stephen and I met the nicest guy from Cupertino who ran with us to the aid station. We really jammed downhill, and my achilles had started to ache and twinge with pain. We made it to the bridge, ate some snacks, and started heading up. Leaving No Hands, I felt like I might be moving slow the rest of the night - but at least I'd be moving.

Yeah, so that dream got crushed pretty quick. After about a mile of hiking, the backs of my heels/ankles were really feeling stiff and sore. Maybe the Advil was wearing off - I don't know. I stuffed a handwarmer down my sock to try and warm it up. Spoiler alert: it didn't work. Then it seemed like everything fell apart - my blisters were killing me. I had been compensating for my Achilles pain and formed a blister on the pad of my left foot. At Overlook, I sat down and took my shoes off. My achilles were swollen. I had blisters where I thought I did.

I called it quits.

I'm still stuck in my head - could I have kept going? Did it really hurt that bad? Maybe I'm conservative, but I don't want to risk long-term injury. I'd like to finish my races feeling like I ran well - and smart. And maybe that's unrealistic - but I'd like to give it another shot before pushing through serious pain.

NOW WHAT
So I walked a mile about 2 weeks after the race, which was still really painful in running shoes. I'd wanted to go longer but started limping after half a mile, so I turned around to limp home. I'm walking normally in shoes that don't put as much pressure on my achilles. I'm doing eccentric heel drops, and Stephen set up a bike trainer - I started that this week, and am feeling tons better.

I'll take it one day at a time. On the bright side, I have more time for art and margaritas!


THANK YOU!
Huge thank you to Stephen for being patient while I figured out how to train - for making dinners while I was at class late and running big weeks - and for being both crew and pacer.

Thanks to Jack for being willing to pace me on my first 100 and being out on the course so much. I'm sorry I didn't make it to Rattlesnake! I wish we could've shared some miles out there.

Thanks to Ken for driving up and crewing, even though we didn't get to hang out! It was awesome seeing you.

And, of course, a big thanks to all of the volunteers (seriously, Kynan and Laura - I wanted to hug-tackle you at Cool) - it was a fantastic event, and I enjoyed (almost) every minute of it!
at 9:40 PM 1 comment: 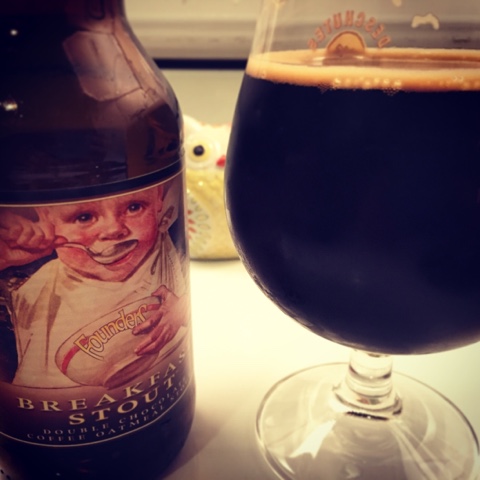