I almost titled this "Overlook: Like a Tolstoy novel, minus the snow" because there were some dark moments, some beautiful moments, and I was occasionally confused - but I think I actually enjoyed it. The more I think about it, it was really spiritual and moving. And I really wished there had been snow. But despite the similarities, I figured the title was overkill.

Anyway, last weekend I completed the Overlook 50 miler. Since my first "ultramarathon" last December, I've fallen in love with trail running, trails, and the incredible community surrounding these events. I was eyeing this race after my second 50km this past May. The Overlook 50 mile event had 13,000' feet of climbing and traveled along miles and miles of Western States trails in beautiful "hill" country. Plus Ann Trason was the RD! What a treat to run the inaugural race put on by an epic ultrarunning legend. When Jack, who mentored me through Silver State, offered to run the whole 50 miles with me, I was in.

Jack kept his word and ran the whole race with me. I kept joking that it was like 2 polar bears in the heat - miserable! See above image for depiction of heat (orange line) and altitude (white line). It hit 100F multiple times and hit a high temp of 103.6F! At the cutoff (mile 35) we picked up the heat-loving cheetah, aka Stephen. With such great company and beautiful scenery, the race was really a joy (despite being somewhat physically uncomfortable the whole time). Plus I got a whole new load of Jack wisdom dropped on me!

No window shopping.
Even if the going gets tough, the tough must make cut-off. Which means walk with a purpose if you've gotta walk!

This race was a great lesson in being prepared for the distance AND weather conditions - it felt like a battle to make cut-off, a pressure which I haven't really felt before. And while I don't want to experience that again, thanks to Jack's coaching I know how to keep going when the heat is on!


Stop doubting.
I can withstand a lot more than I ever thought possible. I remember registering for my first half marathon and thinking it would be a miracle if I could drag my butt 13 miles. I remember registering for my first marathon and thinking it would be the farthest I could ever run in my life- that I would be peaking in my lifetime running at a mere 25 years old. But I did run 13 miles, and I did complete a marathon, and I've kept running since then. And every time I've finished a race, I've rationalized that it must not have been THAT far, THAT difficult... During this past 50 miler, I heard myself say, "I'm not good at this." Well shit, at this point it doesn't matter if I'm good at it - I'm doing it anyway, and I'm having fun! It's easy to self-doubt and to be self-critical. But running (and life) is much more enjoyable "on the windy side of care."


Start training.
I have been SO BAD at being consistent lately. Between job-searching, apartment-hunting, half-assed training and school starting, I have been a poor excuse of an athlete. I'm ready to be disciplined and really put it on the line! I know that I respond well to routine and am excited to have a plan (and stick to it) for my next race. Thankfully my RRCA-certified boyfriend can whip me up something fancy ;) I am feeling really good about prioritizing my health instead of just fitting it in. RAH-RAH-BOOM-BANG GO TEAM.

Puke happens. It's not all bad.
First off, let me start this by saying I *had* a major, major no-puke streak. It might not be 14 years like Jerry Seinfeld, but it was a long time. I pride myself on my ability to withstand stomach viruses, hangovers, and other tummy traumas.

Well, thank you Ann Trason, for ruining my no-vom-streak. I held it in until around mile 25 when Jack told me to "get it out!" I emptied my stomach all over the trails until about Rucky Chucky at mile 36. Thankfully this lesson was accompanied by Jack's "no pity party" rule. And actually, puking felt pretty good and I was able to run intermittently along the Cal Loop. Apparently this is some sort of ritual: other runners on the trail shouted out "great job, kid!" and "now you're a real ultrarunner!" as puke dripped from my nose. I'd brag about being in the top 10 women finishers, but there were only 9 of us (eep!) A total of 30 people total finished the 50 miler: 21 men, 9 women. All results here! 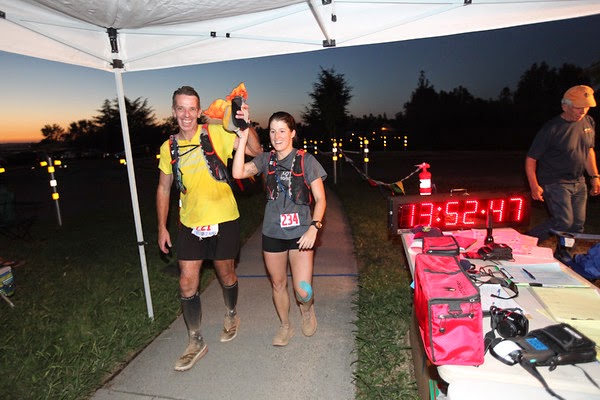